Before we left Tokyo to come back home, we decided to stop by the Edo-Tokyo Museum. It’s a pretty cool museum that mostly covers the Edo period from the 17th-19th centuries in Japan. I was surprised by how large the museum was, and also by the quality of the exhibits.

The metro stop for the museum also happens to be in the neighborhood where Sumo is popular: 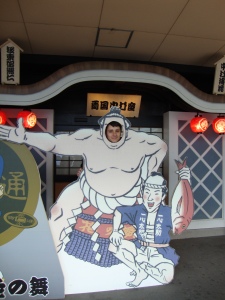 The museum itself is located in a fairly modern-looking building. There are signs to the museum from the metro stop at Ryogoku Station. It’s pretty close by. The entrance fee to the museum is 600 Yen, or about $6 USD, and you can also get an English audio guide for free (refundable deposit). I really liked this museum, not only because the museum has really cool exhibits, but because it also has interactive ones. They also have a ton of dioramas throughout the museum which give you a complete picture of the Edo Period.

Kabuki Theater Exhibition- It looks tiny, but is actually a life-size building

Sitting inside a royal litter- Be sure to take off your shoes! 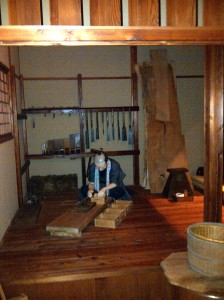 One of the many dioramas depicting the Edo Period in Tokyo

Inside a traditional Edo replica home

Instrument of Surrender from WWII 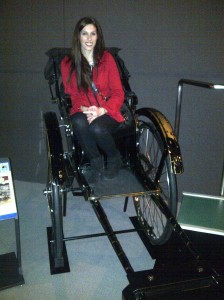 Sitting in a Tuk-Tuk 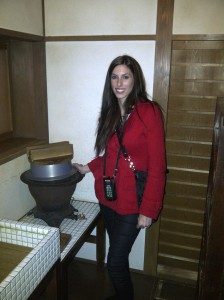 Inside a traditional Edo period kitchen

Exterior of a replica home

Although we didn’t go to many museums while in Tokyo, I would definitely recommend this one. It was a lot of fun, and I think that both children and adults would get a lot out of it!