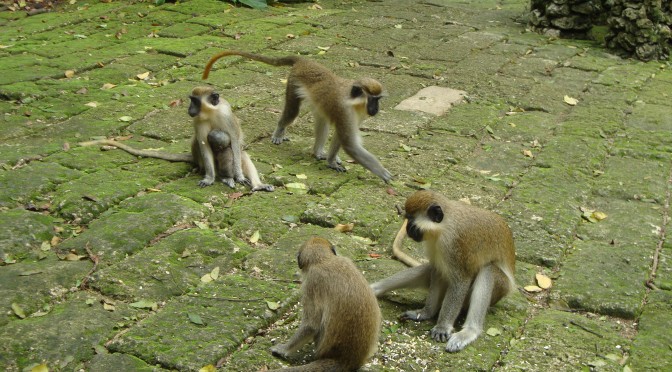 Barbados is a small slice of paradise situated in the Carribbean. While many people come here for the sand and sun, there’s so much to do for those who are looking for something a little more active. My previous post, “Things To Do in Barbados”, outlines some of the things you can do, including seeing a show, visiting a local fish fry, touring a rum distillery, and stepping on board the Concorde. Let’s continue with some my other favorite activities in Barbados:

The major thing that drew me here was getting to see and feed the green monkeys. Up until this point, I’d only seen monkeys in cages at the zoo, so this was a really unique opportunity. Many of the animals (excluding reptiles and certain birds) have free reign to roam around the reserve. If you go at 2pm, which we did, you can feed the monkeys. The employee instructed me to hold out my hands with the food he provided, and reminded us not to pet them. I was surprised by how many monkeys there were, maybe 10 or so. They were all very sweet, and took the food right out of my hands. I even got to see a mommy and baby monkey. Some of the other animals at the reserve included tortoises,  cats, deer, iguanas, and peacocks. Nothing too out of the ordinary, but what else could you expect if you want to walk around with them? 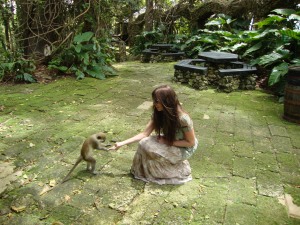 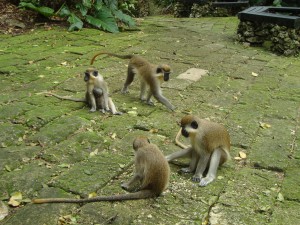 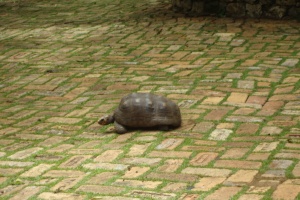 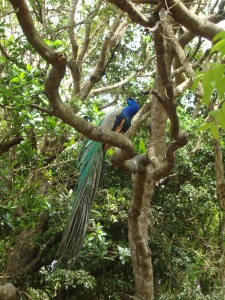 The reserve itself is so beautiful, and reminded me of a secret garden. It’s very green, lush, and overgrown, which in my opinion adds to its beauty. 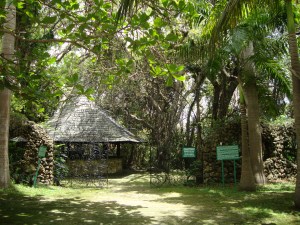 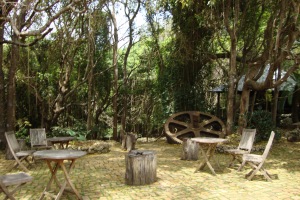 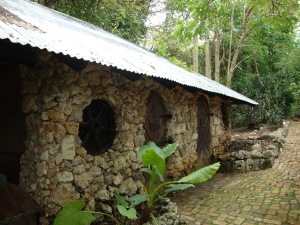 You should definitely make a stop at Harrison’s Cave if you are interested in geology or haven’t visited a cave before. The most unique feature of this particular cave is that you can ride through it on a tram. I’ve never seen that before, so that added to the experience. There are also opportunities to stop and walk around if you wish. Before boarding the tram, you enter a building where you get to learn a bit about the formation of the island (which was not formed by volcanic activity but rather by colliding plates) and the cave’s history. 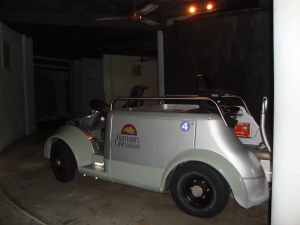 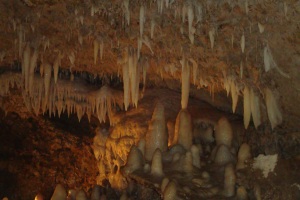 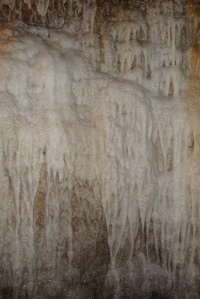 Of course, what would a trip to the Caribbean be without enjoying the turquoise waters? On the advice of our hotel’s concierge, my Dad and I booked a catamaran tour. The company, called Cool Runnings, picked us up at the hotel and drove us down to Bridgetown, where we boarded the catamaran. We swam with the turtles, snorkeled at a shipwreck, and had some free time at a secluded beach (NOTE: all beaches in Barbados are public, but no one was there due to it’s accessibility). Overall, vibe of the tour was a lot of fun: the music was awesome and the other people on the cruise were friendly and easygoing. 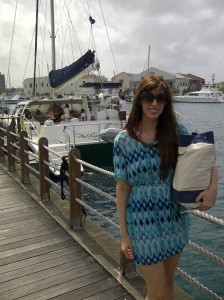 The first stop on our day cruise was swimming with sea turtles. I was nervous around them at first because there were so many, but a few of the crew members jumped in the water to make us feel more comfortable. They even fed the turtles, which kept them close. Unlike in Hawaii, it’s okay to touch the sea turtles, which I had a chance to do.  You can see how close they are in my pictures; it would have been difficult to avoid touching them completely anyway. 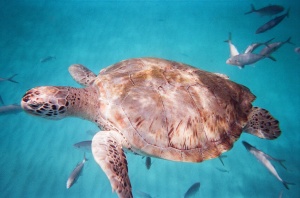 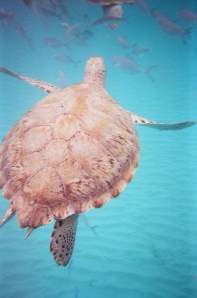 Snorkeling around the shipwreck was also very interesting. Shipwrecks are a bit creepy to me because they are sometimes underwater graves, but I doubt this was the case here since it was only a few hundred yards from the beach. As a bit of a history buff, I do wish they had more information about what caused it and when, but either way it was cool to see up close. 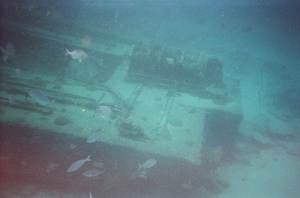 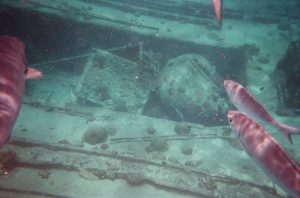 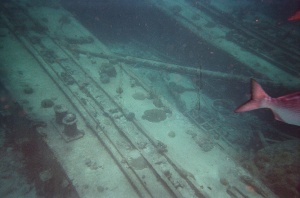 In addition to the swimming and time on the beach, we had an excellent buffet lunch. They gave us mahi mahi, jerk chicken, rice and beans,  pasta, salad, and unlimited drinks. 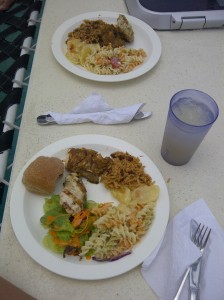 I’d definitely recommend doing a catamaran tour if you have the chance. Also, avoid ending up like me and be sure to bring your sunscreen since you will be sitting outside for several hours. I didn’t bring any with me because it was cloudy that day…what a mistake! I burned terribly and could barely move the next day. Save yourself the trauma! 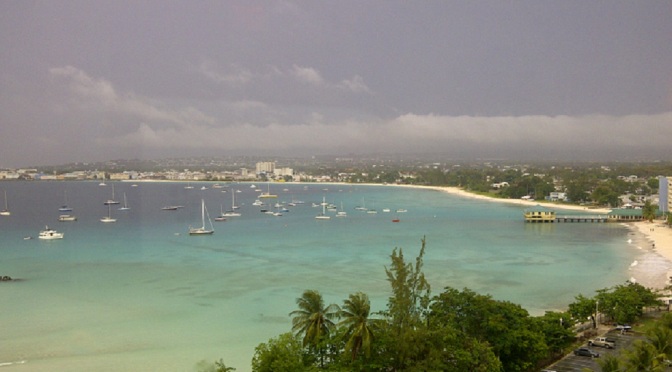 Alex and I go on most of our trips together as a couple; however, because of our work schedules and random opportunities that arise, we do occasionally travel without the other. This was the case when I went to Barbados with my Dad. He had the opportunity to go and invited me to tag along with him for a few days. I had an amazing time and feel like I got a great introduction to this fascinating island. Here are some of the things that I got to enjoy and would suggest including in any Barbados itinerary:

This actually happened while eating dinner at our hotel. We went into the restaurant expecting a late night meal, and were pleasantly surprised by the show that followed. From folk dancing to fire limbo, and a stellar performance of “Rolling in the Deep” by an undiscovered singer, this show was honestly spectacular. It was interesting, interactive, and just so much fun. If you have the chance to see a show like this in Barbados, I would highly recommend it! 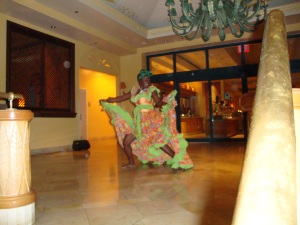 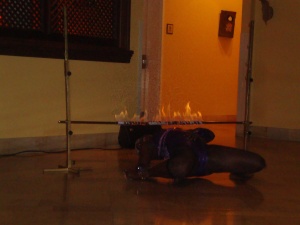 Even if you aren’t an aviation enthusiast, I guarantee this will be an interesting stop! The Concorde is housed in a hangar located right next to the airport. Not only can you see it up close and learn about the Concorde’s history, but you can also step right inside and feel what it was like to be on a flight. We got to walk through the plane, sit in the seats, visit the cockpit, and listen to a takeoff. Kids and adults alike would have a great time here. 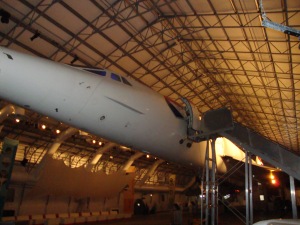 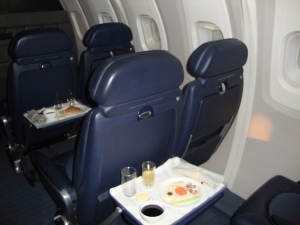 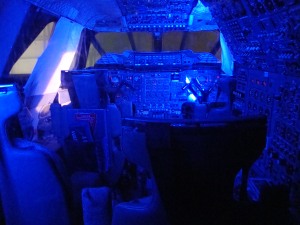 What’s a trip to the Caribbean without rum? Mount Gay Rum offers a distillery tour, a rum bar, and a retail store in one convenient location. My Dad and I were a bit short on time and could not make the tour, however we did shop in the store and sat down at the bar to enjoy a drink. Not being of much a drinker myself, I wasn’t sure what to order, but the bartenders were incredibly nice and offered to create a special cocktail just for me. It was made with rum and peach schnapps, so I decided to name my drink the “Princess Peach”. 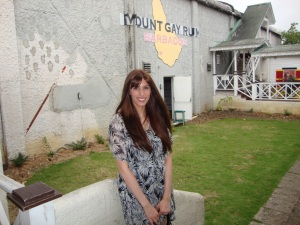 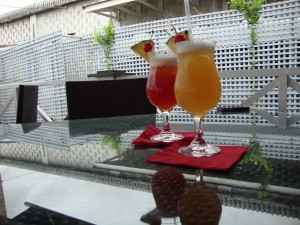 If you are here on a Friday night, make sure you don’t miss out on Oistin’s Fish Fry…it’s THE place to be for tourists and locals alike. Enjoy fresh seafood, good music, and interesting company! There are dozens of vendors serving food and the seats are all cafeteria style, so expect to make new friends. The food is the main attraction, but people also come here to dance, play games, socialize, and be merry! 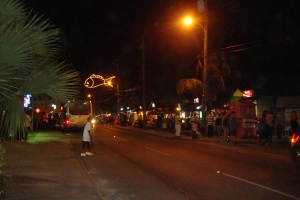 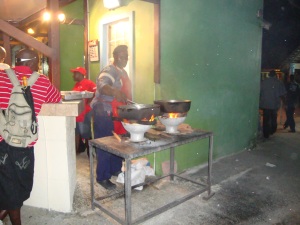 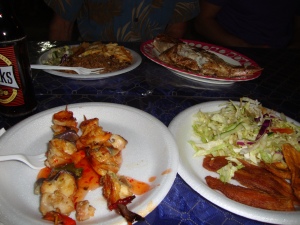 Be on the lookout for my next post: “Things To Do in Barbados, Part Two”, including: