To give you a super-brief history lesson, Kyoto is the old imperial capital of Japan. If you came to Japan to see temples and shrines, you would do yourself a disservice by not coming to Kyoto. There are so many wonderful old buildings to see here, and most of the temples that you see in postcards were taken around this area, and not in Tokyo.

Kyoto is very different from Tokyo. The buildings are much older, and obviously it is a smaller town. Being in Kyoto makes you feel like you are walking through history. In fact, I was on a bus with a few pretentious Americans who complained that it felt “dingy” and “like a developing country”, when they obviously have never seen the true definition of either! While Kyoto is older, that also gives it some character. Don’t judge it. And don’t expect people to speak English here. It is a nice surprise if they do, but for the most part, English is not well-spoken in Kyoto. Even the hotel staff speaks limited English compared to Tokyo.

Alex and I went on a day tour in Kyoto, which took us around to the various temples and shrines in the area. While there are many to see, we had a brief two day stay in Kyoto and needed to see the “essentials”. So without further ado, here they are:

Nijo Castle was built in the 17th Century, by the Tokugawa Shoguns. The main building is famous for the nightingale floors, which were made to creak when walked on. They did this so that residents could be warned of any assassins who snuck into the building.

The Golden Pavillion is a Zen Buddhist Temple covered in gold leaf. It is a well-visited tourist spot, and definitely the busiest stop on our day tour. It can be viewed from several different angles, and also seen up-close. This picturesque temple is located in the midst of garden, making it a great spot for photos. 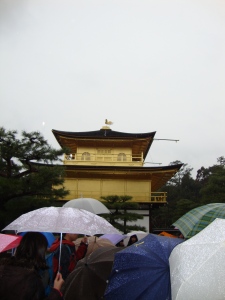 Amidst a sea of umbrellas 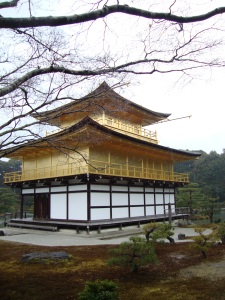 Close-up of the Pavillion